Three and a half days of leave left.  Taking a pretty easy/lazy day at home because the next three days are just stuffed full of activity including going to Baltimore twice, a birthday party, several workouts and climbing again.  It’s windy and cloudy outside so that’s even more motivation to just have a home day.  Plus it keeps me from spending money.  lol

I will be leaving the house once today in order to go workout.  But that will be later tonight around 9 o’clock.  Need that gym to empty out.

Went climbing with my neighbor yesterday and he convinced me to try bouldering.  Actually, I wanted pictures of myself climbing but we can’t take them when I’m climbing and he’s belaying due to needing both hands on the rope at all times so he said if we went bouldering then he could take photos.  I was DEAD by the time we got over there and immediately chose the WORST climb in the area.  lol 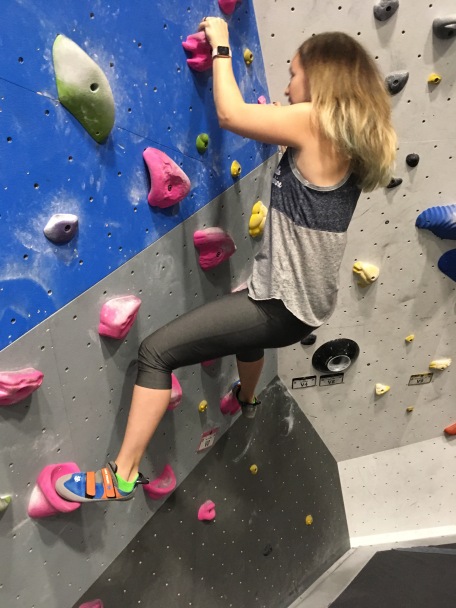 But it was a LOT of fun and we’re going again on Sunday.  After I meet with Ryan the running coach in the morning.

Hit 120 lbs on the squat yesterday which was super motivating.  Also got up to 80lbs on the leg press which is where I was before hurting my back (due to bad form).  Today I’ve got an upper body workout and I plan on getting new PRs on as many of the exercises as I am confident with, ensuring good form.  There is no point in just getting a new high if you aren’t doing the exercise correctly.

I don’t know….things seem to be going just fine recently.  It’s not been phenomenal by any stretch but I can definitely see improvements and, while slow, I’m not necessarily plateauing (knock on wood).

Hope you all had a great week and have fun weekend plans!  Thanks for reading!